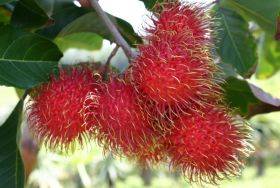 Australian growers have been harvesing rambutans since October last year with many growers in the Northern Territory expecting the harvest of the red, tropical fruit to continue to for a month or more, reports ABC Rural.

The unusual harvest may be due to unseasonal weather during the territory’s dry season, which also saw a split among season.

This is definitely the longest season we can remember. It's been going for at least ten weeks now and it looks like we've still got another month or so left," Kerry Eupene, a rambutan grower told the ABC. "So we're getting a bit jaded of picking and packing rambutans, but the fruit is still really good."

Eupene said while they haven’t been harvesting big yields, it has been constant, with at least two flowerings, adding that some of the other growers in the region had not even begun their harvest yet.

If all goes accordingly, the longer harvest will mean plenty of fruit will be available for the Chinese New Year on 8 February.