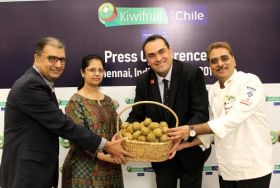 The Chilean Kiwifruit industry launched a new promotional campaign in southern India this week to increase trade and consumer awareness about the fruit.

Representatives from the industry along with the Embassy of Chile in India and the country’s commercial trade office, ProChile, collaborated on the campaign which commenced on 15 July.

This is the second year in a row the industry has promoted its fruit in the country, last year its campaign focused on Delhi. This year the campaign will be implemented by SS Associates, an Indian food marketing consultancy firm.=

The Chilean kiwifruit industry is eager to make to most of opportunities created by the increasing interest in kiwifruit in India and Charif Christian Carvajal, marketing director for Asia for the Chilean Fruit Exporters Association (ASOEX) said expanding its presence in the country is important.

“This is the second time that the Chilean fruit industry will undertake a promotional campaign in the India market and our first inroad in the very important southern India region,” Carvajal said.

Under the bilateral Preferential Trade Agreement signed in 2017, Chilean kiwifruit is subject to an import duty of 15 per cent, compared with 30 per cent for all other origins. The industry will hope to make the most of this advantage as it begins to highlight its fruit through southern retailers.

“We will be reaching out to the discerning Indian consumers through retail tie-ups and media promotions. Chilean kiwifruit promotions are currently on with major retailers like KPN Farm Fresh and Spar across southern India,” said Sumit Saran, director of SS Associates.