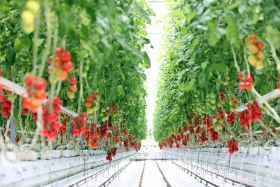 According to a report from Radio New Zealand, the glasshouse will use 100 per cent LED lights to increase yields and boost production through the winter.

Greg Prendergast, managing director of Rohe Produce, said New Zealand’s tomato supplies dipped during winter and this venture would help fill the gap in the market.

“This glasshouse will be the first of its kind in New Zealand with the use of 100 per cent LED to increase tomatoes yields by 50 per cent per square metre,” Jones said.

"You mostly see tomatoes at the moment hitting NZ$12 or NZ$15 a kilogram in retail markets simply because there's not enough tomatoes in New Zealand at the moment,” he added.

"As much as it's good and nice for a grower to get that kind of money, consumers don't want to pay that money. By having consistent yield through those winter periods, we just make tomatoes more affordable for everybody."

The project has received a NZ$14m (US$9.1m) loan from the New Zealand government as part of its Provincial Growth Fund.

It is expected to create 200 jobs during the 12-18 month construction process and 110 permanent jobs once operational year round.