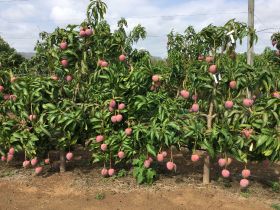 Project lead, Geoff Dickinson (pictured) from the Department of Agriculture and Fisheries (DAF) Queensland, said the industry has long been interested in transforming from low-yielding, low-density orchards into high-yielding, high-density orchard systems.

“DAF have been working on this challenge since 2013, and this project builds on this work,” he said.

“To move from 200 to 600, or even 1,200 trees per hectare requires us to do the equivalent of what architects do in inner cities – that is maximise the efficient use of space,” explained Dickinson.

“We are doing that by growing shorter, thinner mango trees and minimising the width of inter-rows for use by narrower tractors and equipment.

“In terms of mangoes, this intensification involves managing trees as slim hedges or by training trees on trellises which sees them get great support, great light and maximum canopy leaf area to produce more fruit. Short, narrow trees mean sprayers and harvesters can work more efficiently, reducing pesticide use and opening opportunities for new technologies including robotic harvesting.”

Dickinson explained the adoption of high-density slim hedge and trellised planting requires a higher level of investment during establishment and over the first 10 years than conventional lower density planting systems. However, this investment is rapidly recouped by the higher revenues achieved by increased yield per hectare.

Modelling suggests, at their peak, these new high-density and trellised orchards could produce up to 66 tonnes per ha / per year, which is over 3.5 times more than existing low-density plantings

Other benefits include the improvement of on-farm efficiency of mango growing, spraying and picking costs, the reduction of annual fruit production costs (per kg/fruit) by approximately 20 per cent, and an improvement on long-term grower and industry profitability.

“There are also a range of co-benefits of adopting our ‘intensification’ model including reduced water and fertiliser inputs, increased harvesting efficiencies, increased suitability to the introduction of mechanisation and robotics, and greater pest and disease management efficiencies,” Dickinson explained.

CRCNA chief executive, Anne Stünzner said she is confident the study will assist farmers become more productive in the long-term.

“The team and the industry, recognise that growers have genuine concerns about transitioning from tried-and-true systems to new ones, particularly when there are significant set up costs,” said Stünzner.

“We hope this study will assist growers when establishing new mango plantings to help them select which orchard management design is most suitable for them.”

AMIA chairman and owner of Marto’s Mangoes, Ben Martin, said he is excited about the potential outcomes the project has for the Australian mango industry.

“It has been great to be part of something that will have great benefits for the Australian mango industry,” noted Martin.

“The project team involved has been focused on producing real outcomes for commercial mango businesses. They have spent time analysing the true cost of production and really looked at how they can maximise potential earning for growers. The outcomes from this trial certainly have the potential to increase income for growers.”