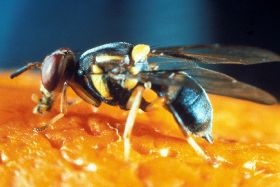 The South Australian government has introduced a complete ban on host fruit and vegetables being brought by travellers to the Riverland, including fruit purchased from Adelaide shops.

The state’s key growing region has been under threat from recent outbreaks including the detection of Queensland fruit fly in Renmark and Mediterranean fruit fly in metropolitan Adelaide.

David Basham, South Australian, minister for primary industries and regional development, said the ongoing pressure from fruit fly on the borders of the Riverland, plus larvae found in interstate fruit sold in shops had required implementation of tougher protections.

“Coming into effect tomorrow, travellers can no longer use a receipt to bring fruit and vegetables into the Riverland that has been purchased in South Australian shops,” Basham said.

“Larvae detections in interstate fruit purchased at Adelaide supermarkets this year have proven the inspection regimes in eastern states are not robust enough to fully protect the internationally-recognised Riverland Pest Free Area.

Basham noted there was too much interstate fruit entering the Adelaide market making it near impossible to track properly treated fruit once it leaves the supermarket.

“We have changed the law from travellers being able to show a South Australian receipt to bring in fruit and vegetables that are a fruit fly risk, to a complete ban. This is necessary to protect the internationally recognised Riverland Pest Free Area, said Basham.

“Our message remains consistent, do not bring fruit or vegetables at risk from fruit fly into the Riverland.

“The law change will impact those entering the Riverland from Adelaide where travellers traditionally bring receipts to demonstrate the produce has been purchased in a South Australian supermarket.”

Figures from random roadblock inspections show one in ten travellers continue to bring illegal fruit fly host material into the Riverland and Basham said the government had no choice but to strengthen the zero tolerance to fruit fly policy.

“When you’re planning a trip to the Riverland, check the list of fruit and vegetables on the fruit fly website and find out what you can pack and what you cannot. If in doubt, leave it at home,” said Basham.

“Fresh fruit and vegetables are still available to purchase in Riverland shops, so buy their and support local businesses in the region.

“We are making this change to protect our growers from the scourge of fruit fly, which threatens our A$1.3bn horticulture industry vulnerable to fruit fly and the thousands of jobs the industry supports.

In addition to abolishing the ‘bring a receipt’ exemption, the government has refined the requirements for commercial suppliers bringing fruit and vegetables into the Riverland.

Fruit fly host material grown interstate must now be treated with specific approved treatments before it can be packed and transported for sale in Riverland shops and supermarkets.