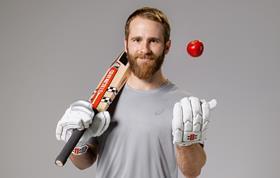 Williamson, who is due to begin his season as captain of Sunrisers Hyderabad in the prestigious Indian Premier League (IPL), said he couldn’t wait to get started.

“I love getting hands-on with the brands I align with, and Rockit is a great product – one that I’m passionate about driving forward,” said Williamson.

“Establishing a Global Ambassador role for Rockit will, we believe, have a hugely positive impact on our international marketing and brand awareness. Kane is an outstanding example of a New Zealander with drive and determination who has taken on the world – just like Rockit.”

The arrangement sees Williamson champion Rockit apples to a cricket-mad audience worldwide. It aligns with the company’s plans to tackle the high-end produce category in India this year, and Williamson’s involvement is expected to help introduce the small, sweet, snack apples to a potential market of millions of discerning Indian consumers.

“It’s a really exciting opportunity to venture into this market,” explained Williamson, who has a huge following in India.

“As Kiwis, we already know that the produce we’re able to generate in New Zealand is of the highest quality and I know that when consumers in India and other countries get the opportunity to try a Rockit apple, they’ll really enjoy them.”

Williamson will be involved in digital activations, marketing and events for Rockit. It’s also the first time the player has approved insignia on his bat, which – for the duration of the IPL season – will carry Rockit branding.

“The fit is without doubt the primary thing I look at when considering a commercial alignment, so this is the first time there’s been any other branding on my bat. While there have been other opportunities in the past, I’d wanted to keep that space clear for the right endorsement.”

According to a release, Williamson has a direct interest in Rockit orchards, an investment interest in brand owner Rockit Global via Oriens Capital, and wholeheartedly believes in the quality of the produce. “Healthy eating is a big part of my lifestyle, and it’s clear to me what a great snack Rockit is. The size is great, and the flavour is incredible,” he said.

The upcoming IPL season will be played in the United Arab Emirates (UAE), but will be televised to millions of viewers. In 2019 the competition was watched by an estimated 462m people, a record for the competition.