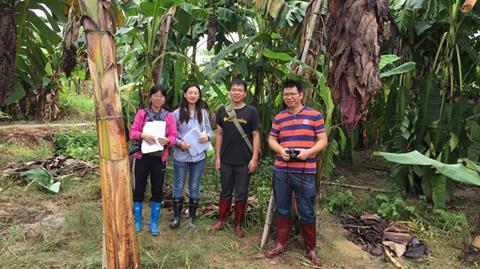 The discovery of Fusarium wilt Tropical race 4 (TR4) in Colombia in August was declared a national emergency.

Some industry experts believe it’s now a matter of when, not if, the disease will spread to neighbouring countries in Latin America.

The soil-borne fungus enters banana plants through its roots. The disease interferes with the uptake of water, causing wilting of the leaves and eventually killing the banana plant.

The pathogen remains viable for decades in the soil and is difficult to eradicate.

The outbreak prompted organisations across the world, including the Food and Agriculture Organisation of the United Nations (FAO), to conduct research with the aim to develop a variety resistant to the disease.

The International Atomic Energy Agency (IAEA), in cooperation with FAO, is one organisation working with researchers, however, as Ivan Ingelbrecht, head of FAO/IAEA plant breeding and genetics laboratory, explained, there’s no simple solution.

After years of research, Chinese experts have recently released a new variety of Cavendish bananas resistant to TR4.

The new variety was developed using chemical mutagenesis techniques. Other countries, including the Philippines, are in advanced stages of developing varieties using gamma irradiation, Ingelbrecht said.

“The release of a new Cavendish variety will benefit many farmers; this success is due to the close collaboration with the IAEA and the FAO on mutagenesis techniques,” said Yi Ganjun, vice president of the Guangdong Academy of Agricultural Sciences in Guangzhou.

“This state-of-the-art technology has resulted in a remarkable breakthrough to combat Fusarium wilt,” he added.

“Mutagenesis techniques can contribute to the development of new banana plants to suit local environmental conditions.”

The new variety is now being multiplied and distributed to other provinces. Scientists use in vitro techniques to grow thousands of small banana plants in culture tubes suitable for mutagenesis using chemicals, gamma rays or X-rays.

This approach speeds up the natural process of mutation in plants and creates genetic diversity that can then be used to produce new varieties, including those with favourable traits.

A coordinated research project with the participation of scientists from six countries, including China and the Philippines, has spearheaded work on developing banana lines with resistance to TR4 since 2015.

“The success achieved using chemical mutagenesis and the promising progress using irradiation in several Asian countries suggests that developing new, TR4-resistant varieties will be possible in the not too distant future in other parts of the world as well,” Ingelbrecht said.

“The IAEA and the FAO are committed to helping countries get there.”