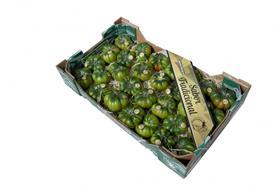 Grupo Agroponiente has started harvesting the first green and Raf tomatoes of the 2019/20 campaign.

The group, and its tomato subsidiary Vegacañada, is the leading supplier of green and ribbed tomatoes grown in the Vega de la Vega and Campo de Níjar areas.

Francisco Ceballos, who manages the lines, said the group was committed to developing these varieties and its growers had acquired decades of experience in their cultivation.

“The early tomato campaign is now coming to an end, with the arrival of the cooler weather heralding the starting of flavoursome varieties including Raf,” he said.

Ceballos warned consumers to be wary of imitations, noting that: “even though Raf has a superior taste, it’s not easy to distinguish it from other varieties with the naked eye”.

“That’s why it is important that the right information reaches the end consumer and that different parts of the value chain work together to make that happen,” he stated.

Grupo Agroponiente sold 368,000 tonnes of fruits and vegetables in the 2018/19 campaign, an increase of 12 per cent on the previous season. Tomatoes were its leading product by volume, accounting for 76,000 tonnes of total sales.