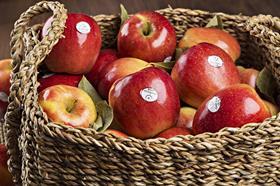 Ambrosia apples reached a record number of export markets this season, according to the two companies that grow and market the club variety.

Describing 2019/20 as a dynamic campaign with excellent continuity, they said sales of conventional and organic apples had been strong in spite of this season’s lower size profile.

“From the beginning of the campaign I expected positive results and this was the case, thanks to the excellent quality and colouring, with slightly lower than average sizes, which nevertheless found a constant outlet in our main markets,” said Marco Rivoira, CEO of the Rivoira Group.

He noted that Italy and Spain had performed well in spite of the smaller sizes, as well as Germany and Scandinavia, all of which received a constant supply of high quality fruit.

“Ambrosia is a fixed presence in the assortment of many points of sale, and its popularity with consumers guarantees us an excellent turnover, he stated.

“The Ambrosia Bio (organic) season was also positive, with higher volumes already sold out in January in strategic markets of Italy, Scandinavia and Germany.”

Zanesco also noted that although shipments to Asia had come to a halt in January because of the coronavirus pandemic, the company would continue to work in the future to expand Ambrosia’s presence in the region.

Throughout the season the club variety was supported by a marketing campaign spanning consumer and specialised press, digital media.

“The campaign was aimed especially at end consumers, but also wholesalers and fruit vendors, rewarding their loyalty and trust through promotions, raffles and gifts on social networks,” the organisation said.