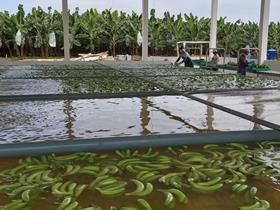 Andean banana producing nations have voiced their support for the Global Alliance Against Fusarium TR4, the devastating pest that has been detected in three Latin American countries.

In a press release from the Inter-American Institute for Cooperation on Agriculture (IICA), the governments of Bolivia, Colombia, Ecuador and Peru said they endorsed the alliance to coordinate regional actions to combat and prevent this pest.

“Fusarium TR4 is the greatest threat in more than half a century to the banana industry, a highly commercially valuable crop and a vital food source for more than 400m people worldwide,” said Manuel Otero, director general of the IICA, which serves as the organising committee of the Global Alliance

“To confront this, the alliance unites the efforts of academia, the private sector and research organisations, and that is where its strength lies.”

He said the issue cut across political, social, cultural, and economic differences of the countries of the Americas.

To date, Fusarium TR4 has been confirmed on farms in Colombia and Peru, and reported to have been detected in Venezuela, and the authorities are working flat out to prevent its expansion.

“As we know, this disease has a high propagation capacity, which is why it represents a threat to food security in the region and globally, its economic impact could be negative and obviously also socially,” said Peru’s Agriculture Minister, Federico Tenorio.

It is hoped that the collaboration between the Andean countries and the Global Alliance against Fusarium TR4 will also help prevent the spread of the disease to other regions of Latin America and the Caribbean.

The Alliance, which was set up last year and formally recognised at the beginning of 2021, aims to support the banana sector in the fight against Fusarium R4T through the development of knowledge, technology and mechanisms to find a definitive scientific solution.

Its actions are based on three fronts: prevention and training, genetic improvement and control methods.

In the longer term, it hopes to develop a new commercial variety of banana resistant to Fusarium TR4.