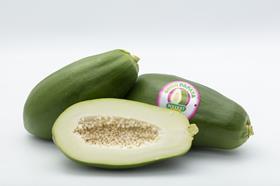 Anecoop has introduced Spanish-grown green papayas to its product line-up in a bid to boost sales of the tropical fruit.

The group said that the fruit confers numerous nutritional benefits in its pre-ripened state, including high levels of potassium and papain, as well as fibre and vitamin C.

Consuming the fruit as a vegetable when it is still green is popular in parts of Asia and South and Central America, but considered a novelty in Europe.

“It differs from ripe papaya both in its exterior colour, which is totally green and does not have any yellow hue, and inside, as the flesh is white instead of orange,” Anecoop said.

Papayas are grown year-round in Spain, with peak production concentrated in the months of January and February. It is mainly grown in areas with a subtropical Mediterranean climate such as Almería and Murcia.

“One of its competitive advantages compared to imported papaya is its proximity to European markets, which reduces transit times and reduces its carbon footprint,” Anecoop said.

According to a study by Madrid’s Complutense University, green papaya has a low calorific value and is an important source of fibres and vitamin C, with 100g providing more than 45 per cent of the recommended daily intake for this vitamin.

“Vitamin C is an important ally of the immune system and helps contribute to its proper functioning, something essential in times of low temperatures and even more so with the Covid-19 crisis,” Anecoop said.

“Another benefit of papayas is that they an enzyme called papain, which facilitates the digestion of proteins in food.

“In short, it is a product that packs a nutritional punch and can be eaten cooked, fried or as an ingredient in fresh smoothies. It can also be an interesting and attractive ingredient for salads, pasta, rice and desserts.”

Anecoop pioneered the cultivation of papayas in Spain and leads its production nationwide with around 30ha of production and an annual output of 500 tonnes.

In 2017, Anecoop set up Exóticos del Sur, a company made up of around 20 producers in Almería, to consolidate and market its papaya production. The group also sources fruit from allied producers in Murcia and the Canary Islands.

Together with its partner companies, Anecoop is part of several projects that encourages farmers and their families not to abandon rural areas by providing them with a stable livelihood, mainly by encouraging production of new crops.

One of these is Carismed, a project to promote the production of papayas for export to the European market.