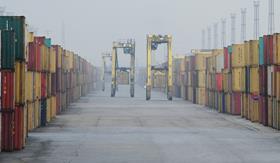 The Port of Antwerp is taking the next step in the development of a 'digitally secure port', it has announced, with the launch of 'Certified Pick up' (CPu), a digital, secure and integrated solution for the release of containers, on 1 January 2021.

The new solution is set to replace the current system of PIN codes and is designed to guarantee 'a secure, transparent and optimised release process for incoming containers', which will then leave the port by rail, barge or truck.

At present, a unique PIN code is required to pick up a container at a terminal in the port. However, according to the Port of Antwerp, the time between providing the code to the shipping company and the driver entering the code at the terminal can be considerable. In addition, the fact that the PIN code is seen by various parties increases the risk of abuse.

CPu, on the other hand, is a neutral, central data platform that connects all stakeholders involved in the container import process.
'The CPu platform receives and processes container information to generate an encrypted digital key, with which the eventual carrier can pick up the container,' the Port stated. 'This digital key is only created when the final carrier is known. The time between the creation of the digital key and the collection of the container is therefore minimal.'

The Port of Antwerp also revealed that CPu would make it possible to trace the parties involved in the collection of a container, allowing authorities like customs and police to access the data exchanged, within the boundaries of their legal powers.

'In the longer term, CPu should allow the digital key to be completely eliminated,' the Port stated. 'An identity-based security process with fingerprints or eye scans might be developed.'

According to the the Port Authority, an 'open and constructive dialogue' is underway with all involved logistics parties, including shipping companies, shipping agents, terminals, shippers, freight forwarders, logistics operators, truck companies and inland navigation and rail operators.

'Together, they will look into how to further shape CPu and implement it in phases,' the Port revealed.

Bernard Moyson, chairman of Alfaport-Voka, commented: “We are pleased that this project focuses on a faster, safer and more efficient release of containers. A collective approach is the only way forward to meet the security challenges. The fact that we have reached a constructive compromise on this initiative proves once again the strength and resilience of the port community in Antwerp.”