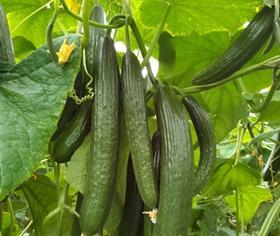 BASF Vegetable Seeds has released promising results from the latest trials of its SEpalin cucumber variety for traditional summer cultivation.

Extensive testing in the Netherlands over the past two summers has shown it produces high yields with intermediate resistance to powdery mildew and cucumber green mottle mosaic virus.

In relation to other resistant varieties, SEpalin produces a higher average fruit weight, which makes it easier to harvest heavier cucumbers, with powerful growth and uniform quality.

Trials conducted in the company’s Belgian testing station confirmed the Dutch findings during the second crop, with SEpalin achieving a strong yield thanks to a large number of pieces combined with a high fruit weight, the company said.

German trials showed similar results. In 2018, SEpalin scored the best in the summer crop trial of ten varieties, with the most pieces and the highest production in kilograms.