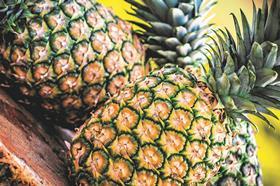 Pineapples could become Brazil’s next export winner according to a study carried out by government agency Conab.

The organisation identified the fruit as having the potential to generate good returns for producers on both the domestic and international market.

Between 2012 and 2018, the country produced an estimated 11.9bn pieces, mainly in the northeast, north and south east of the country.

The state of Pará accounted for over two-thirds of the production volume in northern Brazil. Output during this period grew by around 35 per cent due to a 77 per cent increase in planted area.

The neighbouring states of Amazonas and Tocantins represented 14.76 per cent and 10.33 per cent of the national volume respectively.

But while Amazonas saw a 56.13 per cent increase in output (in spite of planted area contracting by over a third), the opposite occurred in Tocantins, where planted area grew 126.84 per cent but production decreased by almost 11 per cent.

In the Northeast, Paraíba represented just over half of the total produced in the survey period, seeing an increase of 11 per cent in the planting area, while Bahia and Rio Grande do Norte harvested 15.73 per cent and 14.04 per cent of the region’s pineapple production – even though both states saw a reduction in area.

In the state of Bahia, which has borne the brunt of an ongoing drought, revenues from pineapple production fell by 68 per cent, while planted area contracted by 3.36 per cent.

According to Tridge, the global sourcing and market intelligence hub for the food industry, 3.9m tonnes of fresh pineapples were exported globally in 2018 with a value of US$2.1bn. Costa Rica was the biggest exporter, accounting for 49.6 per cent of the total shipment volume.