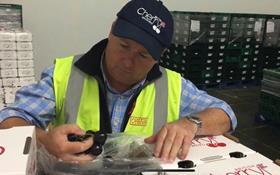 Shoppers in southern Europe are finding British cherries on their supermarket shelves this summer as part of a major export drive by the UK’s largest supplier.

“British Cherry Growers aims to export some 20 per cent of our crop this season,” said Matt Hancock, managing director of Norton Folgate. “With blossom just behind us we know that we’re going to have a good crop available and it’s just the right time to start making some noise about British cherries.”

British Cherry Growers, a consortium of some of the largest cherry growers in the UK, has already secured retail programmes in South Africa and the Middle East, and is now aiming to win new customers in France, Spain, and Italy.

“Our ambition is to export 300 tonnes of cherries from the UK this year,” said Hancock.

The UK is expecting its largest harvest of cherries in recent years. It marks a turnaround for the cherry industry in Britain: significant new plantings have been made in the last five years, with much larger volumes of cherries now expected, starting in 2018.

“At British Cherry Growers we have also invested in a state-of-the-art optical grader, the largest of its kind in the UK,” said Hancock. “We ran fruit across it for the first time last season and serviced all our major supermarket customers. They were very satisfied with the results.”

Hancock is confident that food retailers in continental Europe will now respond very favourably to the cherries that he can supply. Tough standards applied by the big supermarkets in the UK mean that his growers should be more than able to meet the requirements of their counterparts across the English Channel.

The biggest challenge could be the unpredictable weather conditions that characterise most British summers. “That’s true,” Hancock admitted, “but it’s means that we’re very flexible and highly responsive. Our customers also know that our big investment in grading means we can deliver a consistent high-quality product which their shoppers will want to buy.”

This summer heralds a bright new future for the UK cherry sector. Who would’ve thought Britain would be one day exporting one of its favourite summer fruits to other parts of Europe?