Buffeted on all sides 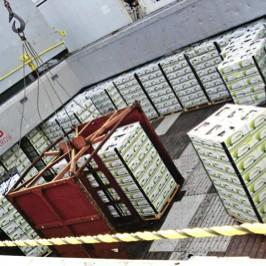 After two years of pain, this year’s peak season brought some much-needed cheer to reefer owners. As expected, between February and April an increase in Ecuadorean bananas (and South Atlantic squid) drove demand for capacity. This coincided with the coldest winter in the Baltic for almost two generations, which – as reported on p13 – meant many units and reefer containers were caught in the ice outside St Petersburg.

The net result was that the benchmark average Time Charter Equivalent for February and March was almost 50 per cent higher than for the corresponding period in 2010. The cold in the Baltic and civil unrest in North Africa had two important side-effects: bananas originally destined for Russia and Libya had to be diverted into other markets, putting pressure on prices and causing some to suffer heavy losses; and a reduction in chartering activity, which in turn caused the domestic Ecuadorean spot banana price to crash.

The challenge to the Gaddafi regime in March led to a spike in the oil price, forcing bunker costs to their highest levels since 2008. As the reefer market comes off the boil, operators have to decide whether to keep their units trading or send them into lay-up.

It is not just the increase in availability of reefer slots and equipment, or indeed the aggressive drive for market share by container lines, that threatens the commercial viability of specialised reefer operators. The cost of bunker fuel has risen dramatically over the past decade: in February 2002 the cost of intermediate fuel oil with a maximum viscosity of 380 cSt averaged US$103 per tonne in Rotterdam; by February 2011 the average was US$563 per tonne.

Over the course of the same period, the fuel cost to ship 210,000 boxes of bananas from Ecuador to three Mediterranean ports in a 25-year-old, 465ft3 vessel steaming at 20 knots has risen from an estimated US$200,000 to US$1.1m. In banana-box terms, this is a rise from just under US$1 per box to US$5.35 per box, which is almost as much as the box of fruit itself costs.

Compare that result with the performance of a much larger, three-year-old 600ft3 vessel, which uses 125 tonnes less fuel to carry 35 per cent more fruit on the same voyage, and you can understand why small specialist vessel operator Hamburg Reefer Chartering is planning to demolish 20 per cent of its fleet in the short term, and why all reefer newbuilds are likely to be the larger, more fuel-efficient units.

With the supply of oil forecast to dry up mid-century, fuel efficiency has replaced the rising tide of containerisation as the greatest single challenge facing the specialised reefer business. The container lines recognise that building ever larger and more fuel-efficient vessels is part of the solution, creating a greater critical mass of both dry and reefer slots over which to spread the cost. The other equally important part, however, is slow and super-slow steaming.

With some exceptions, the new super post-Panamax vessels will be too large to enter ports from where reefer products including bananas are shipped, not to mention too large to transit waterway conduits. That is the main reason why Maersk subsidiary apm Terminals is developing a huge hub port on the Costa Rican coastline.

The medium- to long-term future for most fruit exporters involves shipping produce in reefer containers that operate up and down the mainline north/south and transatlantic hub-to-hub liner services. These are slower services that make more than one change en route. The path to market will not be as quick or as convenient as it is today and with every transhipment comes additional risk.

The trade-off for lower fuel cost is a compromise on service quality in terms of speed and directness. For dry cargo, where capacity cost tends to be the only major factor, this change to more widespread ‘hub-and-spoke’ systems represents little more than a logical extension of existing models. But will it work for reefer, where speed to market and port-to-port are critical, value-adding determinants of trade success? Unlike dry cargo, if service quality is compromised on reefer so too is product quality. Although there have been technological advances in reefer box design, the longer the voyage, the greater the risk of spoilage – no matter how efficient the system.

One problem for specialised reefers is that most of the cargo interests that are chartering capacity do not have the critical mass necessary to take control of their supply chains. Markets are dominated by large, consolidated buyers, in whose interest it is to preserve a fragmented supply base. Another part of the problem is oversupply. Retailers who prioritise cost cutting are winning the battle against suppliers, whose priority it is to add value. With the exception of the integrated banana multinationals and New Zealand’s single-desk kiwifruit exporter Zespri, suppliers have no value-adding leverage.

The container lines are creating new cargo flows, conditioning a particular supply chain into acceptance of the new mode. The reefer cannot compete and the ongoing reduction in the size of the specialised mode over the next ten years will have significant consequences: how, for example, will the Russian banana trade be served in 2020? Will major players Maersk and msc continue to run direct, fuel- and capacity-inefficient transatlantic services once supply and demand for container ships reaches equilibrium? Or will the Ecuador-to-Russia trade be served more slowly via the Limon/Moin hub?
And what about the Mediterranean banana trade, the main charter market driver? What are the implications for traders and their customers if the future for small and handy-sized units is limited? The writing is on the wall for small and vintage tonnage, and, equally worryingly, it might also be for the banana charterers who depend on such units.