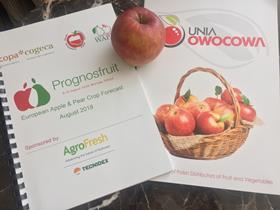 The leading 21 apple-producing nations across the European Union are set to turn out a bumper crop in 2018.

That is the verdict of the World Apple and Pear Association (WAPA), which revealed a 2018/19 seasonal forecast of 12.61m tonnes of EU-grown apples at Prognosfruit in Warsaw, Poland.

The crop estimate represented a 36 per cent climb on last year's total EU crop of 9.25m tonnes, and a rise of 13 per cent on the three-year average, WAPA noted.

Much of this growth will be driven by Poland, the bloc's largest apple producer, which is expecting a huge 4.48m-tonne crop this season, up 56 per cent on the 2.87m tonnes harvested last year and 23 per cent on the three-year average.

France, Europe's third-largest grower, is forecasting a more modest rise of 5 per cent to 1.5m tonnes, while Germany's apple crop is set to soar 66 per cent year-on-year to just under 1m tonnes.

Only Spain, Portugal and Latvia of the leading 21 EU producers are expecting lower apple crops this season, WAPA revealed.

By variety, Golden Delicious volumes should increase 23 per cent to 2.35m tonnes, 3 per cent higher than the three-year average, while Gala volumes are set to climb 15 per cent to 1.46m tonnes.