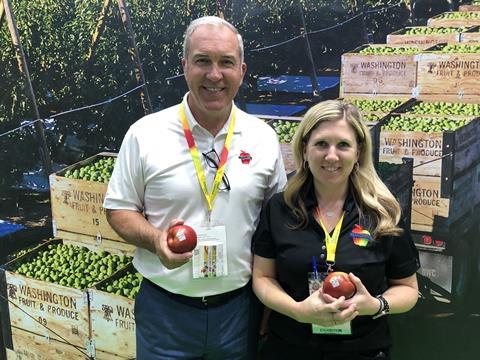 Todd Fryhover and Lindsey Huber of the Washington Apple Commission

Asia remains a lucrative market for Washington apples but a number of factors are making exports to the region more challenging, the Washington Apple Commission revealed.

Speaking to Fruitnet at Asia Fruit Logistica in Bangkok, the commission’s president Todd Fryhover said this year’s short crop is a challenge, with Washington State growers expecting their lowest volume since 2007 following temperatures of over 40°C in August.

The value of the US dollar – which hit 20-year highs in a number of countries this year – and duties in China and India are also hampering trade.

Fryhover admitted he has been surprised by President Biden’s decision to retain these duties at the same level introduced by Trump.

The 70% tariff on US exports to India has been an important factor in America’s declining volumes to that market, alongside higher production costs.

Turkey and Poland, where labour and land are cheaper than in the US, have been “backfilling” the Indian market, Fryhover said, and other sources such as Iran are eating into America’s market share.

Looking ahead, the Washington Apple Commission’s primary focus will be on what it calls “the home court” markets of the US, Canada and Mexico, but beyond that, Asia is the priority.

Vietnam, Taiwan and China are the key markets for Washington State apples in Asia, and new specialty varieties such as Cosmic Crisp are set for growth, particularly in Taiwan.

“Up until last year there has been large enough demand in the US domestic market for Cosmic Crisp that exports weren’t much of an option, but volume is starting to ramp up, and as it does, we’re watching where fruit is sent.

“One of first places is Taiwan, and we’re there to support Taiwan on the retail side, to try to push that product through. We’ll continue to do that as the production volume grows.”