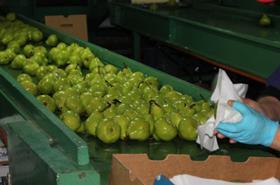 More than half of Chilean fruit producers face a serious shortage of workers according to a new survey from the Federation of Chilean Fruit Producers (Fedefruta).

Of the 557 fruit companies surveyed, more than half said they had 50-70 per cent fewer workers than they needed for their orchards and packhouses.

“The shortages faced by producers who are harvesting at this time are mostly within this range,” said Fedefruta president Jorge Valenzuela. “If this situation continues, by the time we get to September we’ll have a deficit of more than 150,000 workers for critical tasks.”

The survey shows that companies in the Maule Region face the greatest shortage, with an average of 52 per cent depletion in workforce.

Almost half of those surveyed said that they had increased average salaries by 20-30 per cent in a bid to attract more workers, while almost 28 per cent have been forced to increase wages by 40-50 per cent.

The situation is particularly complex in the Coquimbo Region, where, in spite of wages rising by more than 50 per cent, companies working on the citrus harvest faced a worker deficit of 48.7 per cent.

“In this area they had to leave fruit unharvested, which means lost work for the entire year,” said Valenzuela.

The situation is equally serious in the central region, where most of the work currently being undertaking is pruning. The availability of workers in the O'Higgins Region, for example, is down 47.5 per cent.

When asked for the reasons behind the shortage, 92 per cent of respondents said that workers feared losing their state benefits if they signed a work contract.

To counter this, Fedefruta has called for a campaign informing citizens that they are permitted to work without giving up their benefits during the pandemic.

In addition, 36 per cent of respondents cited a lack of foreign labour, mostly as a result of border closures since the onset of the pandemic, as a major contributor to the shortage.

Just over a quarter of respondents (28 per cent) said childcare responsibilities during lockdown was preventing people from going to work, prompting Valenzuela to call for schools to reopen as soon as possible.

A fear of contracting Covid was cited by 20.3 per cent of companies as a further reason why people are staying off work.

“It is essential to continue advancing in vaccination plans in rural areas of the country,” Valenzuela said.

Finally, 15 per cent of respondents said the shortage was due to movement restrictions between quarantined communities and farms.

“If we don't have people, the fruit is going to start to rot and we are going to have many more complications,' Valenzuela said.

Fedefruta is calling on the authorities to meet with the industry in order to discuss urgent measures to alleviate the shortage.