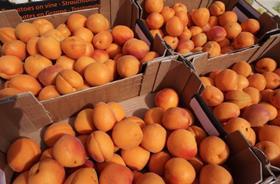 Inclement weather has caused a significant drop in European apricot production this year, with producers braced for disruption to harvesting and logistics due to the coronavirus pandemic.

Estimates published yesterday by the European Assembly of Fruit and Vegetable Producing Regions (AREFLH) peg this year’s crop at 401,883 tonnes, a fall of 37 per cent on the 2019 harvest and 28 per cent below the average of recent years.

The decrease is the result of a combination of insufficient chilling hours during the winter, frosts and hail in different regions.

“To find another campaign with a similar level of production, you have to go back to 2003 and 1998 with 390,000 tonnes and 365,000 tonnes respectively,” APREFLH said.
The quality of the crop is expected to be good, with brix levels projected to rise in the coming weeks.

AREFLH added that Covid-19 is expected to have a significant impact on harvesting, labour, and logistics on farms this season.

Spain’s harvest is expected to weigh in at 93,740 tonnes, 15 per cent lower than last year. Production is down in all areas due to the lack of winter chill hours, March frosts in Catalonia and Aragon and hail damage in parts of Castilla-La Mancha.

In France, production is set to fall 29 per cent to 93,542 tonnes, while in Greece frosts in northern production areas will reduce the harvest by 13 per cent to 78,500 tonnes in spite of the increase in planted area.

AREFLH said the 2019 apricot campaign was marred by weak demand in northern Europe and poor prices.

In recent years, there has been a strong reconversion of plantations, especially in Spain and Italy, with traditional varieties giving way to new red-fleshed cultivars.