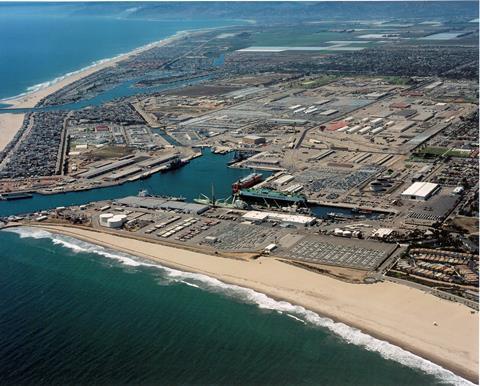 Port of Hueneme in California

Del Monte Fresh Produce has apparently extended its 34-year partnership with the Port of Hueneme on the US West Coast by agreeing a third extension of its original 1995 contract.

Under the deal, the fresh produce giant will continue to use Hueneme’s facilities for a further five years, according to a report by the Maritime Executive.

“The port has been a valuable partner in helping us stay competitive in an increasingly regulated business environment. This contract modification extending our 1995 agreement includes one more five year extension.”

Harbour board president Jason Hodge said the partnership between the Port and Del Monte has got better over time. “We are proud that a world class customer like Del Monte choses the Port of Hueneme for their west coast operations,” he stated.

The agreement extension is particularly well timed since it came the day before the port celebrates its second annual Banana Festival, noted port CEO and executive director Kristin Decas.

Del Monte arrived at the Port of Hueneme in 1979. Since then its fresh produce arrivals have risen from 100,000 cartons to in excess of 325,000 cartons, including fresh bananas, pineapples, honeydew and cantaloupe melons.

The Port of Hueneme moves US$7bn-worth of goods each year and consistently ranks among the top ten US ports for automobiles and fresh produce, according to Maritime Executive.