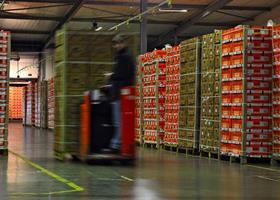 The Port of Dunkirk in northern France has made sizeable investments in preparation for the UK’s departure from the EU, despite the continuing uncertainty over the details of any deal.

Next month’s election will largely determine whether the new Brexit deadline of 31 January is extended further, or whether prime minister Boris Johnson can win the majority he needs to push his controversial deal through Parliament.

In October, Port of Dunkirk held an opening ceremony for its new infrastructure developments, including a new road and a buffer zone for trucks in case of the long delays and long queues that have been widely forecast.

“We have tripled the number of people involved in phytosanitary and customs checks,” says business development manager Yvan Gomel. “In case of Brexit, the ministry of agriculture will employ 30 new people for vet and phytosanitary controls – right now there are three. French customs are working on creating a smart border to speed the process up, but fruit you may have to physically check, so in the meantime we need extra parking. French customs will also have drones flying over the ferry terminal for additional security.”

According to Gomel, product checks will depend on the source of the fruit. “Potentially we will be tripling the number of checks we do, but it depends,” he says. “Mangoes from Mali, Côte d’Ivoire and Senegal are likely to require checks, while bananas from Martinique and Guadeloupe may not.”

In an effort to reduce congestion, the Port of Dunkirk has also set up new alternative lines from Dunkirk to the UK and Ireland, including to Dublin and Cork, as well as to Teesport and Grangemouth, ports presently called at on transhipments via Dunkirk from East Asia.