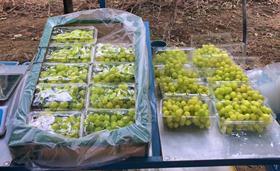 “Over the past two years we have noticed that Horse Shoe Valley has proven to be earlier than the rest of Aussenkehr, so far ten days to two weeks earlier,' Vasiljevic continued. 'Last year we started harvesting on 17 October and this year we start on 27 October. We believe this could be a result of the area being in a microclimate, with warmer winds coming through the Horse Shoe Valley from the desert and long days of sunshine. We called it ‘Horse Shoe’ because of its uncanny resemblance to a horse shoe.”

Initially the company marketed most of its grapes in the European Union. “However, we have started developing sales in South Africa and are looking to expand further here to take advantage of being the first producers in Southern Africa,' Vasiljevic explained. 'The same goes for the UK market, we are looking to expand our footprint there as well.”

'As a region we have to work to continue to market Namibia and put us on the map and top of mind in leading export markets,' she said.

'While we haven’t had experience with other breeder varieties yet, we believe the Arra varieties have proven to be successful for Solar Grapes.”

'In addition, we believe it also empowers workers to take more responsibility for their work,” she added.