Ecuador banana exports fall in first half of 2022

Ecuador exported 180m boxes of bananas in the six months to June, a fall of 8.04 per cent on the same period last year. 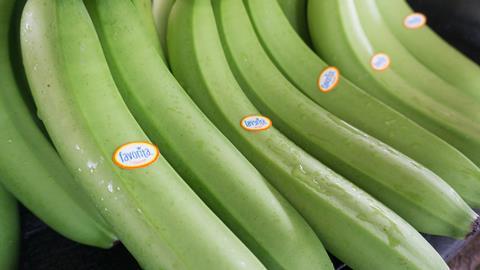 Despite the fallout from the war in Ukraine, shipments to Russia reached similar levels to 2021, totalling 38.8m boxes versus 38.9m in the year-earlier period.

Exporter association Acorbanec said the reduction in exports was primarily due to lower production caused by various factors, including the cooler weather, the impact of increased costs such as fertiliser, and the impact of having to comply with the EU’s MRLs on certain chemicals like chlorpyrifos.

The 18-day nationwide strike called by indigenous workers at the end of June, which is now over, also reduced the exportable supply of bananas.

The association noted that ongoing container shortages and the rising cost of fertilisers and other inputs had taken their toll on the industry in the first half of the year.

Highlighting the impact of Russia’s war with Ukraine, Acorbanec said the collapse of the rouble in February had pushed up the price of imported products like bananas, causing consumers to switch to cheaper products.

“Additionally, the payment system and the flow of capital for exporting companies have been affected by payment limitations, in addition to not receiving full payments and delays in them, generating payment problems for banana producers,” Acorbanec said.

The association noted that the conflict between Russia and Ukraine, which together accounted for 25 per cent of Ecuador’s banana exports, had worsened the crisis affecting the sector.

Acorbanec also criticised the European and US supermarkets for not passing on cost increases on bananas to consumers, claiming that they are paying less this year than in 2021.

In March, the trade association was part of a delegation of banana producing countries that travelled to Brussels to meet with the European Commission and leading supermarkets to demand retailers pay a fairer price that allows producers to continue supplying sustainably grown, high quality bananas.

“In summary, we can say that a large part of the current problem of low prices in Ecuador is due to a loss of competitiveness and the conflict between Russia and Ukraine (the latter being the source of an oversupply in the rest of the markets), in addition to the extremely high values being charged by shipping companies for contracts and spots, as well as supermarkets being unwilling to pay more to the exporter despite the fact that everything has gone up,” Acorbanec said.

Industry forecasts suggests production will remain lower than 2021 levels for the third quarter of this year.