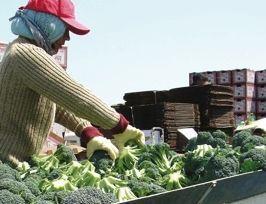 The Equitable Food Initiative (EFI) has released a free resource to the fresh produce industry to help grower-shippers identify and reduce risk in their foreign recruitment processes and with farm labour contractors.

The non-profit organisation said the tool would help companies avoid the common pitfalls associated with recruitment programmes and labour providers.

“As the labour shortage in the produce industry intensifies, many growers increasingly rely on recruiters, labour contractors and the H-2A guest worker programme for solutions, but despite employment best practices, labour recruitment has blind spots that can put growers at risk,” EFI said.

The Responsible Recruitment Scorecard is available free on the EFI website in English and Spanish at www.equitablefood.org/scorecard.

Grower-shippers choose from two versions of a detailed questionnaire—one designed to help identify risks that are often associated with the foreign recruitment of workers and the second to determine risks that can be present when working with farm labour contractors.

After filling in the confidential questionnaire, the scorecard provides a rating indicator along with key areas growers can address to drive continuous improvement across their recruitment processes.

Because labour recruiters play an important role in identifying a potential workforce for many grower operations, workers are vulnerable to exploitation from corrupt recruiters who are involved in labour trafficking and charge illegal recruitment fees.

A 2014 Urban Institute study of labour trafficking victim records found that 71 per cent of H-2A and H-2B workers who had been trafficked paid on average US$6,150 in illegal recruitment fees.

“These payments are rarely made to their US-based employers. Rather, they are often made to foreign-based recruitment agencies or farm labour contractors in the form of debt,” EFI said, noting that this debt can then be used to control workers through the threat of violence, resulting in an agricultural labour supply chain where forced labour is endemic.

“These scorecards allow growers to have visibility into what are often invisible risks they take on by using third-party labour providers,” said Kenton Harmer, director of certification and impact at EFI.

“As a self-assessment tool, growers use the results internally to determine which recruiters and farm labour contractors are most aligned with the ethos of their business and to build partnerships that further reduce their vulnerabilities around forced labour.”

The produce industry’s 2018 release of the Ethical Charter on Responsible Labour Practices created an increased demand for social responsibility, called for every farmworker to be treated with dignity and respect and stated that employers must not tolerate modern slavery.

“Responsible recruitment is the right thing to do, and we’ve found that it can also drive business performance,” said Harmer. “Not only does it reduce the legal and commercial risks for the grower but it can also create an environment for meaningful worker collaboration which results in better quality products and increased company efficiencies.”