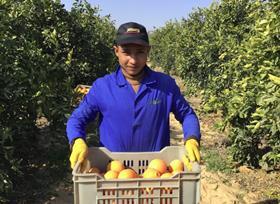 Egypt has become the world’s largest exporter of oranges by volume, surpassing rivals Spain and South Africa, though these two countries still make much more in revenue from their orange exports.

According to a new report from Tridge, Egypt exported almost 1.8m tonnes of oranges in 2019/20, an increase of 9 per cent compared with the previous year, generating a revenue of US$660m.

The dramatic rise in exports over the past three years is mainly the result of the steep devaluation of the Egyptian pound (a condition of the country receiving a bailout from the International Monetary Fund), coupled with a governmental action plan, which have improved the quality of Egyptian oranges and made them much more competitive in the international market.

The Egyptian pound lost 18 per cent of its value against the dollar in 2016 and a further 47 per cent in 2017. Although the exchange rate marginally increased – by 0.6 per cent in 2018 and 6 per cent in 2019 – it still has remained low, giving the sector a price advantage that has triggered a surge in demand in both existing and new markets.

China, in particular, has significantly increased its import volume since 2019 to cater for domestic demand after its own production was impacted by citrus greening disease. The two countries share virtually the same harvesting season, making Egypt an obvious choice.

In October 2017, the Agricultural Export Council of Egypt and Ministry of Agriculture and Land Reclamation launched an ambitious programme requiring orange farms to comply with a new framework for food protection.

In order to assess the scale and quality of production, the new system aimed to register and code orange farms participating in exports in order to be able to monitor their farming practices and properly regulate the use of pesticides.

These measures especially helped small to medium-sized local farmers to raise the quality level of their oranges so that they could meet international standards and engage more in global trading.