Figs on the road to success 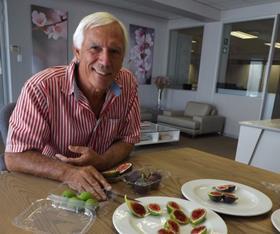 In 2015, South African plant breeder re:inc innovation said it was determined to put South African figs on the map. Staying true to its word, the company has now announced that two new cultivars are ready for commercialisation.

These cultivars have already been sampled by leading supermarkets in the UK and have received favourable reviews, indicating their suitability for sale.

Keith Wilson, exotic products breeder at re:inc innovation, used the best parentage sourced from around the Mediterranean Sea in his breeding programme. The collection started in 1998 from varieties imported by the ARC in the 1960s and 70s for evaluation under South African conditions.

“Besides these new selections from our breeding programme, there are now a further six varieties that are currently under second phase evaluation,' said Wilson.

Before the planting of commercial varieties in 2003 for the fresh market, South Africa’s fig industry, which was previously based on production for drying and jam making, had declined from around 400,000 trees in the 1940s to less than 30ha in the early 2000s.

At the same time, increased migration from southern European countries to nations in the north such as the UK and Germany, brought about a new demand for exotic fruits that until fairly recently did not feature strongly on retail shelves. Figs are one such fruit and potentially creating new opportunities for South African growers.

Re:inc innovation’s comprehensive fig breeding programme, which is one of only a handful in the world, is in the process of offering South African and international growers a range of new varieties which will hopefully revolutionise fig production globally.

For South African growers it would mean that they could enter a high-value category which, due to growing demand, will ensure a sustainable long-term fruit export business.

Riaan van Wyk, Director of re:inc innovation, said the new varieties may well mean that South Africa could supply leading customers for a period of six months of the year in future.

“We are looking at fig varieties that have all the necessary eating and keeping qualities but that are earlier and later than the bulk produced now between February and the end of March.”

With only 2 per cent of the world’s production of figs currently being produced in the Southern Hemisphere, there are clearly great opportunities for South Africa, according to Van Wyk. “Apart from anticipated demand in the UK and Europe, one must also remember that there is also already significant consumption in countries such as Japan, South Korea, Taiwan and China in the east.”

“Amongst the most important criteria for breeding are to increase the average weight of marketable fruit to 75 grams, more early Breba, in the pre-Christmas production period, and late season varieties, retaining the best taste and eating characteristics,' Wilson added. 'We would also like to increase the fruits resistance to handling, heat stress and wind damage, as well as having better transportability.”