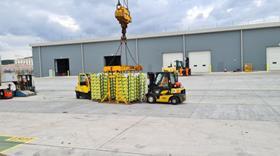 Today’s (12 March) announcement by the UK government about the adjustment of the timelines in the introduction of controls for EU imports, has been welcomed by Freshfel Europe.

The postponement, made in a written statement by government minister Michael Gove, was described by the association as a 'crucial relief' to enable the sector to smoothly adapt to Brexit.

This is particualrly crucial given the ever-challenging context of the ongoing Covid-19 pandemic, Freshfel pointed out.

Freshfel has for some months been advocating, in cooperation with its members, for more flexibility from the UK. This is linked to the obligation for EU fresh produce exports to the UK to carry phytosanitary certificates from 1 April.

The UK has now agreed to postpone the introduction of phytosanitary certification obligations for most fresh produce, considered low risk plant products, until January 2022, when documentary checks will start to apply.

Physical checks at Border Control Posts on fresh produce will only be applied from March 2022.

“Freshfel Europe has been voicing strong concerns over the last months and we consider that this postponement is essential to ensure the supply of the UK market and the continuation of trade flows through the Channel, across which the EU exports over 3m tonnes of fresh fruit and vegetables a year,” said general delegate Philippe Binard.

Following the news, the sector has further called on EU and UK authorities to 'make the most' of this extended nine-month transition to speed-up preparations to ensure the smooth running of operations in 2022.

The challenge remains 'enormous', Freshfel said, with over 750,000 phytosanitary certificates required on an annual basis to sustain EU-UK trade in fresh produce.

This was described as a 'substantial economic and administrative burden', and a 'threat to the capacity of the industry to continue ‘just in time’ operations if administrative procedures are not sped-up'.

'In Freshfel Europe and FPC’s letter to the RT Hon Michael Gove, the sector reiterated the need for electronic certification transmission between the EU and the UK to be up and running before the end of the year through the e-Phyto hub,' said Freshfel's director for trade and market access Natalia Santos-Garcia Bernabe.