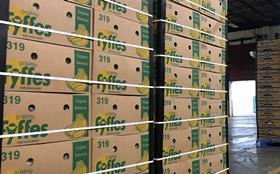 On April 20, Fyffes North America made the second round of weekly donations of 10,000 pounds of fresh bananas and pineapples to support the city of Philadelphia’s coordinated hunger relief efforts.

This effort was spearheaded by Fyffes North America leadership, along with representatives from Holt Logistics Corp, the City of Philadelphia, and Philabundance.

“Access to fresh food during the Covid-19 pandemic is becoming an increasingly urgent issue in the Philadelphia area,” said Juan Alarcon, CEO of Fyffes North America. “As the largest importer of fresh fruit into the Port of Philadelphia, we are uniquely suited to address food insecurity at this moment.

'We are thankful for mayor Jim Kenney, Holt Logistics, and especially Philabundance for their tireless efforts to provide hunger relief for thousands of residents in Philadelphia and beyond,' Alarcon added.

Fyffes and Philabundance delivered a shipment of approximately 10,000 pounds of fresh bananas and pineapples to a warehouse site in Roxborough that has been set up as an emergency operations centre to get food to local residents in need.

According to Philabundance, nearly 60,000 pounds of product has been sent by Fyffes to city distribution sites so far.

As the season progresses, Fyffes expect additional weekly donations to contain melons and other tropical fruits.