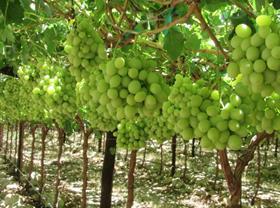 Although the total early season South African table grape exports at the end of week 48 are more or less at the same level as last season, there is a significant rise in shipments from the Orange River compared with the same stage last season.

Shipments at the end of week 48 from the northern regions are running behind last year, mainly due to summer rain disrupting activities somewhat.

This is the major reason why shipments are somewhat behind schedule in a season when growers started their harvest earlier than last year.

The South African Table Grape Industry’s (SATI’s) latest forecast indicates that the country could still ship between 61m and 67.8m cartons this year. However, the harvest has only just started and much can happen before the final shipments take place in April next year.

So far this season, supply patterns show that shipments to a number of markets are significantly higher than last year. The supply to the EU is slightly up on last year, but has just about doubled for the UK.

South African table grapes are arriving in much better marketing conditions in Europe and the UK compared to last year, when big supplies from Peru lead to in depressed markets.

Reports indicate that Peru is shipping more fruit in this period to the US where the market is also stronger due to an earlier end to the Californian season.

The early weeks of harvesting also indicated that the Orange River, if everything stays on track, could have an excellent season in terms of volume and quality.

SATI’s figures show that the Orange River could end up close to 20m cartons, which will exceed the harvest of the previous two seasons.

Karsten executive Piet du Plessis said that in general all growers are very positive about the season. “The grapes are there and the quality during the early weeks have been great.'

In the north of the country, the intake volumes are a bit lower than expected due to summer rain. “The berry size and the quality of the grapes still look good and so far mostly Midnight Beauty, Tawny Seedless, Prime Seedles and Starlight have been packed.”

What is interesting at this stage of the season is the fact that increasingly new cultivars are coming into bearing and this will change the fortunes for growers in future.

Late ripening varieties allow Orange River growers to produce and pack deep into February, with the grapes on the market well into March.

Increased plantings of Scarlotta Seedless, a late red seedless variety from SunWorld, as well as the two white seedless varieties Autumn Crisp (SunWorld) and Sugar Crisp (IFG) have been recorded.

These varieties are expected to open up new opportunities for growers in the region for late marketing. There are indications that growers in the Orange River are slowly reducing their Flame Seedless and SugraOne plantings.