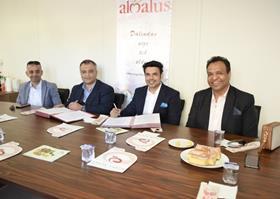 According to IG, the partnership will see 50,000 tonnes of 'best-of-breed' apples cultivated in Himachal Pradesh and Uttarakhand, regarded as the best location for growing superior varieties due to its climatic conditions.

Engin Tarim has become known for its environmentally friendly approach, as well as its technological proficiency and modern outlook, IG stated.

'A production capability of 55,000 tonnes of first-rate apples and a depot that can stock 17,800 tonnes of apples coupled with novel protective cultivation methods has earned the brand a GlobalGAP and Good Agriculture Certification,' it revealed.

“We are extremely delighted to join hands with Engin Tarim,' said IG director Tarun Arora. 'Apples are one of the world's most consumed fruits. At IG International, we’ve been able to curate and upkeep a community of apple aficionados who’ve loved the IG apple range over the years. This partnership will bring scalable production, expertise, network and quality assurance to all our customers. The IG-EngimTarim will be the new abode for the juiciest top-notch apples in India.

'As it has been many years since the first apple container was loaded from Turkey to India, Turkey has become the top source of apples for this non-stop developing country of India. We’re thrilled to announce the new partnership between IG International and Engin Tarım. On one hand, IG International, which is by far the number one supplier, distributor, importer, and exporter in India and one of the leading fresh fruit companies in the world, and on the other hand, Engin Tarım which is the largest private apple grower in continental Europe and the leading producer of apples exported to India, are now coming together.”

Seyda Ertug, chairman of Engin Tarim, commented: “With the establishment of this one-of-a-kind joint venture in India, the cooperation between these companies that love agriculture has become official. While these two leading companies continue to deliver quality and freshness in the industry, innovative and revolutionary projects will come with the combination of each firms’ knowledge and development. We believe that this new partnership will bring a fresh breath to the global fruit and vegetable industry and, hopefully, serve as an inspiration to many others.'