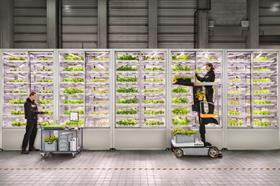 “The coronavirus pandemic has put a global spotlight on the urgent agricultural and ecological challenges of our time,' said Erez Galonska, co-founder and chief executive of Infarm. 'At Infarm, we believe there’s a better, healthier way to feed our cities: increasing access to fresh, pure, sustainable produce, grown as close as possible to people.

'As we scale to 5m ft2 in farming facilities across Europe, North American and Asia by 2025, this investment will help us make a truly global impact through our network, preserving the thousands of acres of land, millions of litres of water and ultimately change the way people grow, eat and think about food.”

“We are excited to partner with the Infarm team to accelerate their urban vertical farm vision, ultimately creating a more sustainable food system for a growing population, explained Dharmash Mistry, partner of LGT Lightstone. 'Fresher, tastier and healthier food using 95 per cent less land and water, no pesticides and 90 per cent less transport.

'With over US$1bn of customer demand, partnerships with 17 of the top 50 global grocers, Infarm is set to revolutionise the market behind a unique ‘demand led’ modular business model. We look forward to working with Erez, Guy and Osnat to create a better, healthier and tastier future.”

This modular, data-driven, and distributed approach – a combination of big data, IoT, and cloud analytics, in addition to rapid growth at a global scale – 'sets Infarm apart from any other urban farming solution'.