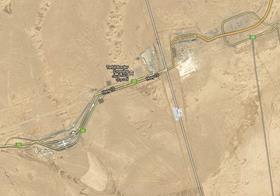 Jordan has apparently halted shipments of fresh fruit and vegetables to Iraq in response to Baghdad's decision to close a key border crossing between the two countries, the Chinese news agency Xinhua has reported.

Citing local media reports, the agency said Iraq had closed its border with Jordan in light of anti-government protests that blocked the main highway linking the two nations.

The crossing point in question is the al-Karama/Tarbil border post on Highway 10, which forms a key supply route from Jordan into the Al Anbar Governorate of Iraq and beyond.

Jordan's fresh produce sector is one of its profitable agricultural industries, with tomatoes, cucumbers, citrus and bananas among the profitable products grown in the Jordan Valley.

Abdullah Tarawneh, assistant secretary general of the Jordanian Ministry of Agriculture, was quoted as saying that all fresh produce exporters had been notified of the border closure.

However, Zuheir Jweihan, head of the Jordan Exporters and Producers Association for Fruits and Vegetables, reportedly urged the government to intervene to solve the crisis.