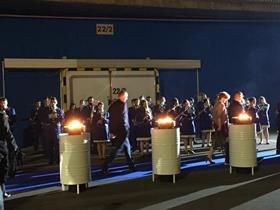 Port president Dragomir Matic on stage at the anniversary event

Luka Koper’s president Dragomir Matic has reaffirmed his desire to grow the Slovenian port’s infrastructure and expand into the Far East, as the port celebrated its 60th anniversary at an extravagant event to thank its business partners.

Speaking at the event, held in a coldstore at Koper's fresh produce reefer terminal, Matic said: “By now we have achieved the largest market share in container shipping to Hungary and Slovenia, we have registered steady growth in Austria and the Czech Republic, and we are penetrating new markets in Central Europe, especially in the south of Germany.

“In the sphere of automobile shipping we are the second largest port in the Mediterranean and therefore we plan to consolidate our investments in this sector too. We can reach far beyond the Mediterranean since we have established direct lines for car shipping with the Far East.”

The event, which resembled the Eurovision Song Contest at times, included a brass band, an opera singer that scattered petals on guests as they entered, a gymnastics display, and even a song by Slovenia’s 2011 Eurovision contestant Maja Keuc.

Fruit and vegetable shipping only accounts for a portion of throughput at the multi-purpose port, which was established in the former Yugoslavia and now has 12 terminals.

Its main fresh produce trade comes in the form of imports from Egypt and Israel to hinterland markets in Central and Eastern Europe, and growing apple exports from Poland.

The port was hard hit by the Russian import ban, which, according to Marina Rus of Koper-based forwarder Intereuropa, reduced imports from Israel by 40 to 50 per cent. On the plus side, Polish apple exports have increased significantly as the country was forced to shift to new export markets.

In addition, the port’s fresh produce reefer terminal is set to benefit from large investments in the adjoining container pier over the next three years.

In his speech, Matic announced that the port would spend €300 million on improving the port’s infrastructure and equipment by 2020, with the main investment to be made in the container terminal, where he sees the largest potential for growth.

Some €235 million will be pumped into lengthening the pier where containers are loaded and unloaded, allowing room for two vessels of up to 14,000 standard container units (TEUs) to dock at the same time. At the moment there is only room for one ship of this size, plus a smaller one.

However, Matic emphasised that Koper is “not only piers and cranes”, saying its services and geographic location are its “key competitive assets”.

Located as the first port in Eurpope for imports and the last port for exports to the Middle and Far East, Luka Koper is promoting itself by emphasising the transit time savings that its geographic position can offer – a particular concern for the perishable goods trade.

Matic also mentioned the fact that Koper operates seven days a week, which is not the case at the neighbouring port of Trieste, one of Koper's main competitors in the northern Adriatic region.