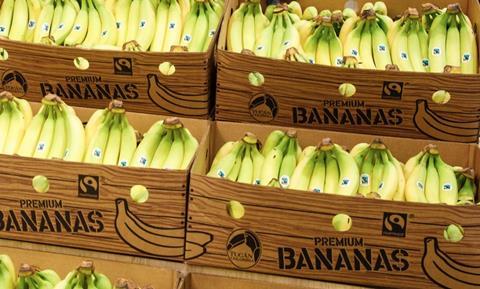 Lidl has abandoned efforts to switch its entire banana offer in Germany and Switzerland to Fairtrade-branded fruit, after customers in both countries apparently failed to respond positively to the move.

At the end of September 2018, the retailer announced it was going to stock exclusively Fairtrade bananas in its approximately 3,200 German and Swiss stores. As of this month, around 40 per cent of those stores had apparently made the switch.

But according to Jan Bock, purchasing manager at Lidl Germany, the response from shoppers was not completely positive. 'We did not succeed in convincing the customer of our commitment,' he explained.

The group insisted it did remain committed to the Fairtrade concept, pointing out that it would continue to sell conventional and organic bananas under the brand.

However, from this summer it will also provide German and Swiss shoppers with a third choice – Rainforest Alliance certified bananas at 'an introductory price' – as it does currently in its UK stores.

The response from the German press has largely been critical. The Frankfurter Allgemeine Zeitung described the development as 'a flop', while the Süddeutsche Zeitung said Lidl had been forced to 'row back' on its earlier commitment.

But Lidl hasn't given up hope of improving sales of Fairtrade bananas in future. 'We will continue to educate our customers on the added value of Fairtrade-certified products at the point of sale, and we stand by Fairtrade,' Bock added.