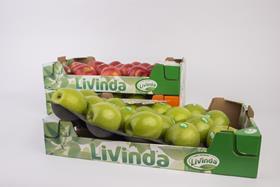 Under the slogan ‘Es de aquí y se llama como tú’ (It’s from here and it’s named like you’, the campaign consists of putting individual stickers on up to 10m apples with the 200 most common Christian names in Spain with the aim of encouraging people to buy local, rather than imported apples.

Another key feature of the campaign, which is heavily focused on social network platforms as well as conventional print and ambient media, is the ‘They are from here’ scheme providing grants to Spanish female athletes.

“If you had to sum up this brand, it would be by its clear commitment to a year-round presence, allowing consumers to find the product on super shelves throughout the year, thereby retaining permanent contact with them,” the company said.

The 2020/21 campaign also features a range of events and activities to support women’s participation in different sports. Ignasi Argilés, Nufri’s director of production and trade, described these actions as “a success from the point of view of participation and dissemination”.

As part of its ongoing commitment to corporate social responsibility, Manzanas Livinda also continues to collaborate with different food banks to meet the needs of the most vulnerable people in society, while also raising funds for different charitable causes, including research into the fight against the Covid-19 virus.