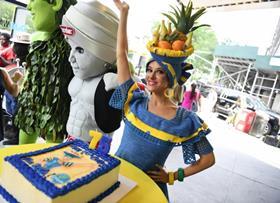 Since 1944, Miss Chiquita has been an iconic symbol of Chiquita’s bright yellow bananas, and now the fresh produce giant is celebrating the 'first lady of fruit’s' 75th anniversary by taking a look back at her accomplishments throughout the years.

Miss Chiquita was introduced to Americans in the early 1940’s to help educate consumers on how to ripen, peel and enjoy bananas, as they were considered an exotic fruit at the time.

The animated banana character gained notoriety for her commercial jingle, which at its peak, was played 376 times a day on radio stations throughout the United States.

The character went on to star in top TV shows and movies, solidifying her status as a pop culture icon. Years later in 1987, Chiquita’s leading lady received a makeover from renowned artist Oscar Grillo to take on the form of a vibrant Latin woman.

“We’re so excited to celebrate 75 years with Miss Chiquita and the integral role that she has played for our fans and brand,” said Jamie Postell, director of sales North America for Chiquita. “As a society, we’ve watched how her character has evolved and played a vital role in the growth of the banana industry throughout the years.”