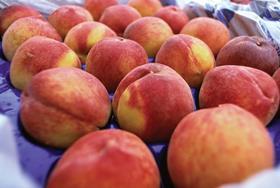 EU production of peaches and nectarines in marketing year 2018/19 is estimated at 3.5m tonnes, 12 per cent lower than the previous campaign, the result of unfavourable weather conditions in most of the major producing countries.

That is the verdict of a new US Department of Agriculture (USDA) GAIN report, prepared by agricultural specialist Carmen Valverde and drawn from a number of experts across the bloc, which has also forecast total EU cherry production is projected to grow to 793,058 tonnes, a 30 per cent year-on-year increase.

According to the report, the value of EU stonefruit exports continues to decline as a result of the 2014 Russian embargo.

Production of peaches and nectarines is down due to a fall in production in some major growing nations, with frosts in Italy and a long winter and a wet and cold spring in Spain among the contributing factors.

The leading export destinations for exports outside of the EU are Belarus, Switzerland, Ukraine, Serbia, Brazil, Macedonia and Norway.

The USDA report suggested that the forecast 30 per cent growth in EU cherry production was largely down to strong growth in Germany and Poland – the latter of which could experience a bumper harvest in 2018/19.

Indeed, Poland is expecting to produce 260,000 tonnes of the fruit in the coming campaign, up from 91,300 tonnes in the previous year, climbing above Italy and Spain as the leading EU producer by volume.

Cold temperatures at the end of February that delayed flowering, followed by hail and rain from mid-May to mid-June, are the reasons for Italy's forecast drop in production to 96,000 tonnes, down from 118,259 tonnes in 2017/18.

Cherry imports, meanwhile, were valued at US$181m, as the EU brought in 48,657 tonnes from outside countries – 32,627 tonnes of which came from Turkey.