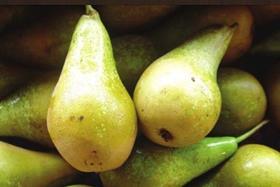 Pear volumes in four of Europe’s leading production countries are expected to remain steady at 2010 levels or record a slight decline this coming season, with the notable exception of Guyot-Limonera volumes in France, which should rise by 10 per cent.

At the recent Interpera 2011 conference, held in Aix en Provence, France, the forecasts for the 2011/12 campaign were announced, with top producer Italy is expected to maintain last year’s lower-than-average crop of just over 50,000 tonnes of Coscia-Ercolini pears. Figures for the country’s Conference and Williams production were not provided.

In France, Guyot-Limonera levels are forecast to rise by 10 per cent from just under 50,000 tonnes a year ago, while Spanish production of the same variety will drop by 2 per cent to 40,000 tonnes.

More significantly, Spanish Coscia-Ercolini volumes are expected to slump by 17 per cent year-on-year this season to around 35,000 tonnes.

In the case of Portugal’s Rocha industry, production levels are predicted to increase by 1 per cent compared with 2010 to 200,000 tonnes, although this is likely to be significantly higher than the five-year average of just over 150,000 tonnes.

European pear producers, from Italy, Spain, Belgium, France and Portugal, produced almost 2.2m tonnes of fruit last year, of which the principal recipients were Italy (30 per cent), Spain (20 per cent) and the Low Countries (23 per cent).

Two of Europe’s largest markets for fresh produce, the UK and Germany only accounted for 1 per cent and 2 per cent respectively.