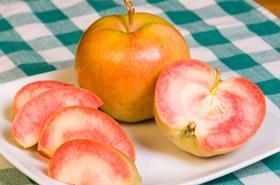 Apples sold today are larger, less acidic, and have a longer shelf-life than their wild ancestors, according to a new study.

The research was published in the journal PLoS ONE by Sean Myles, an associate professor in agriculture at Dalhousie University in Canada.

Myles found that modern, cultivated apples were around 3.6 times heavier on average than the wild apples from which they descended.

He also discovered that they were half as acidic and much less bitter than those ancient heirloom varieties.

The research focused on fruit belonging to Canada’s Apple Biodiversity Collection in Kentville, Nova Scotia, an orchard that produces more than a thousand different apple varieties.

“Using historical records, we found that apple breeding over the past 200 years has resulted in a trend towards apples that have higher soluble solids, are less bitter, and soften less during storage,” Myles wrote.

“Our results quantify the significant changes in phenotype that have taken place since apple domestication, and provide evidence that apple breeding has led to continued phenotypic divergence of the cultivated apple from its wild progenitor species.

“Our work demonstrates that cultivated and wild apples have diverged phenotypically, and that hundreds of years of apple improvement have shaped the variation in fruit and phenology we observe among cultivated apples today.”