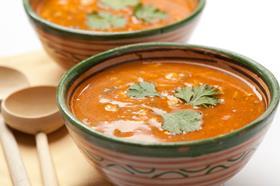 Round tomatoes are used in harira soup consumed during Ramadan

Morocco is restricting exports of its Europe-bound round tomatoes to ease a pre-Ramadan surge in local prices for a key component of the nation’s cuisine and fast-breaking meals.

According to press reports, Morocco’s sends some 430,000 tonnes of tomatoes to Europe each year, making it the region's largest outside supplier. Unprecedented demand from Europe due to fall in production has caused the price of one of Morocco’s cheapest fresh staple foods to soar over the past few weeks, and inflation has stoked domestic protests ahead of Ramadan which starts on 2 April.

Local media said export curbs would halve the local price for tomatoes to less than 5 dirhams (US$0.51) per kilo.

“The round tomato is the basis of the Harira, the Moroccan soup that people consume during Ramadan.This means that a lack of tomatoes during this period is devastating for the consumer,” she explained.

“However this [pre-Ramadan tomato export restriction] is not a usual situation. Normally at this time of the year prices are stable because the availability in Europe is correct. Dutch tomatoes starts getting to markets as well as French and other local production in Europe and UK. However, due to the current high cost of gas, European producers postponed the cultivation creating lack of production in the tomatoes and also peppers and cucumber.

“Prices for these products went up due to limited availability putting pressure on growers from Morocco. This ended up with inflation in domestic market. Government has to react to protect local consumers in a very important period.”

Morocco’s move adds to a raft of crop protectionism worldwide. The war in Ukraine is accelerating food inflation that was already rising, spurring governments to ensure domestic supplies by restricting trade abroad. According to press reports, Argentina is blocking export registrations for soybean meal, while Indonesia tightened control over palm oil sales. Nearby Egypt banned exports of staples like lentils.