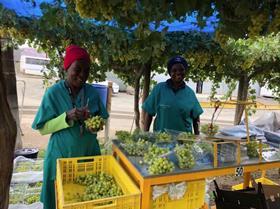 “I saw how effective this method of packing is during a visit to California and we built our first vineyard packing station in 2007,' he said. 'The following year a grower, Orange River Vineyard Investments, built ten of these stations on what was then a young farm. Now every season they pack 800,000 cartons in this way.