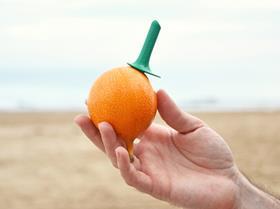 One of Colombia’s leading exotic fruit exporters has launched an ingenious new device designed to make the consumption of granadillas – and potentially other similar fruits – much easier.

Consumers can use the combined straw and spoon, which is also called granadilla, to make a hole in the fruit’s skin and then suck out its gelatinous flesh and edible seeds, before using the spoon end to eat the remaining bits.

According to Spanish studio Joan Rojeski, which came up with the concept, the tool’s design was inspired by the leaves of the real granadilla.

Its clear emphasis on convenience is reminiscent of the Genuine Coconut, the coconut with the ring-pull opening and straw that scooped this year’s Fruit Logistica Innovation Awardand has since gained listings with a number of major retail chains.

Granadillas are produced in a number of countries, including Colombia, Ecuador, Peru and South Africa.