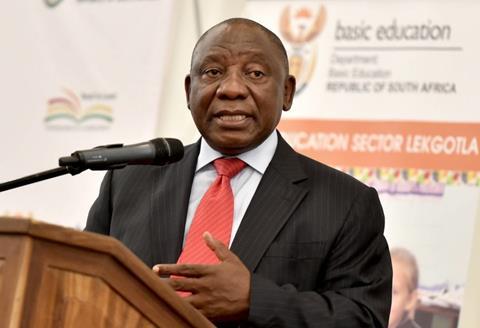 The issue is the arrival in Europe of recently shipped South African oranges, which is at risk due to the new EU regulations.

After yesterday’s meeting Ramaphosa welcomed the potential strengthening and growth of existing bi-lateral trade ties. This included a commitment to resolving current and urgent trade matters, particularly on exports of citrus from South Africa to the EU.

Ramaphosa supported the process of further discussions to be held at a ministerial level, to work out a solution that will allow for sustained trade in the citrus sub-sector.

South African citrus leaders have claimed that the new regulations imposed last month by the European Commission on the importation of South African oranges into the EU were ”unfair, impossible to comply with and not based on proven science”.

During the meeting, it was highlighted that the South Africa-European Union (EU) Strategic Partnership functions within the framework of the Trade, Development and Cooperation Agreement (TDCA), which was ratified in 2004.

“The EU is South Africa’s largest trading partner as a bloc,” said a statement issued by the presidency in Pretoria.

These figures indicate that both the EU and South Africa has much at stake and that obstacles in developing further trade should be avoided.

The fact that the issue of new EU regulations and its effect on South Africa’s fresh produce trade has now been escalated to the highest level is something of a victory for South Africa and the citrus sector.

While there is some immediate relief in South African citrus circles today, most leaders cautioned that there is some way to go to resolve the issue.

Insiders have said that industry leaders are awaiting feedback on the request of the South African president to his counterpart that urgent relief should be granted to save what is called ‘floating consignments’ of fruit.

This relates to fruit which that has been shipped recently and still needs to arrive and be offloaded in European ports.

Ramaphosa also welcomed Michel’s pledge to supporting Africa’s efforts in achieving food security and decreasing the continent’s dependence on agricultural inputs from elsewhere in the world.

A joint project plan was agreed to assist Africa in developing its own fertiliser production capacity. The commitment followed a positive reception to Ramaphosa’s proposal at the recent G7 summit in Germany, that Africa be enabled to invest in developing its fertiliser to deal with food insecurity.

Observers stated that this was an important move in moving the EU and Africa closer together and in addressing the problem of extremely high imported fertiliser cost and shortages, which are developing due to the war in Eastern Europe.

According to the presidency statement, Ramaphosa applauded the positive development of the EU-Africa partnership, which continues to flourish following the AU-EU Summit held in February 2022 in Brussels.

“The close ties have facilitated more open and practical engagements on various trade, political and peace and security matters,” the statement noted.