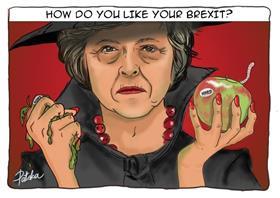 During May’s FPJ Live congress in Birmingham, delegates were asked which political party had the most to offer the UK fresh produce industry. There was little surprise when the Tories emerged on top, with a whopping 72 per cent of the vote.Historically, the UK's agriculture sector has long voted Conservative. But could that be set to change?

Before the 2015 election, the Huffington Post warned: “EU membership is worth £7.8bn a year to the British farming, food and drink industry, through direct subsidies and market access. However, if the Conservatives were to win this year’s general election they may lead us out of the EU within three years, putting UK farmers at a serious competitive disadvantage with the rest of Europe.”

Now that this unfortunate eventuality has come to pass, one would expect the government to be making promises, such as guarantees on market access and funding, for the farming sector’s continued support.

In 2015, British farmers received €3.25bn from the EU's agriculture fund in direct payments, due to stop when the UK officially leaves the EU in two years' time. Just over a year ago, the government promised to match EU funding, but only until 2020.

Many farmers have expressed their fear that the Conservatives' focus when negotiating trade deals will be on banking and financial services rather than on agricultural issues like access to the EU market and labour.

While the Conservatives have appeared obsessed with immigration during the campaign, the Labour party’s priority has been on access to the single market, workers, the environment and the economy.

“Under Labour, the workforce you have recruited, invested in and trained from the EU will have the right to stay,” said Labour’s Rachael Maskell. The party also pledged to ensure all the risks of food production didn’t fall on farmers, extending the powers of the Grocery Code Adjudicator.

Former Tory chancellor Lord Lawson did little to quell concerns about labour shortages under Theresa May. “There will be some changes on the immigration front,” he said in April, “but it’s people like the Romanian fruit pickers that we don’t need.”

Jack Ward, chief executive of the British Growers Association, gave a stark warning regarding such labour shortages, stating that farmers could be forced to relocate abroad, to places like eastern Europe, North Africa and South America, to be closer to an available labour pool.

However, the Conservatives seem deaf to such voices. Historically, it may have made sense to vote Tory; this time, it’s going to take some explaining.