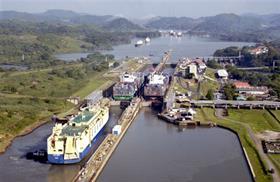 Shipping analyst Drewry Maritime Research says it expects transhipment activity Panama to grow strongly once the expansion of the Panama Canal is completed. The expansion project, which is due to be completed next year, will enable 14,000 TEU vessels to pass through the canal, increasing demand for transhipment options.

Drewry is forecasting a double-digit jump in transhipment activity for 2016 and annual growth of 5 per cent thereafter, leading to Panama Pacific coast throughput of 6m TEU by 2024. Transhipment activity in the wider Central America/Caribbean region is also set to grow as a result of the expansion, the company said.

According to Lloyds List, nearly all of the transhipment cargo moved through the canal is currently handled exclusively by Hutchison’s Balboa terminal, with a small volume passing through PSA’s Rodman terminal. In 2014, Drewry estimated that 3.4m TEUs of transhipment cargo was handled on the Pacific coast of the canal, with Hutchison responsible for 3.2m TEU and PSA 230,000 TEU.

To cope with this influx of cargo, both Hutchison and PSA say they will increase capacity at their existing facilities – Hutchison to 5m TEU in time for the opening of the expanded canal, and PSA to 1.8m TEU after signing a 20-year concession last year.

The expansion project is due to be completed by December, with the first commercials vessels passing through the new locks in the first quarter of 2016.