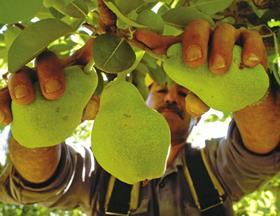 At the second edition of Interpera, the international pear congress held last week in Sint-Truiden, Belgium, attendees heard the European pear forecasts for 2009.

According to the forecasts, which were presented by organisers Areflh (the Fruit and Horticultural European Regions Assembly) with producers’ association Catalonia Qualitat, France should recover its volumes of Guyot pears, which are expected to reach 55,000 tonnes this season, according to Fld.

Spanish pear volumes, on the other hand, are expected to drop to 40,000 tonnes, while Portugal anticipates a volume of 95,000 tonnes for its Rocha variety. Volumes of Conference pears are forecast to weaken in both Spain and Italy.