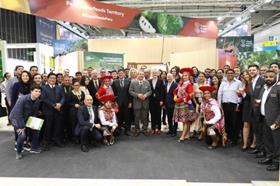 Promperu, the commission in charge of promoting Peru exports and tourism, announced 400 Peruvian companies firmed up 1,200 trade deals over the three days at Fruit Logistica in Berlin.

It’s a record figure for the South American country and is worth an estimated US$300m.

Delegation representatives, headed by Promperu, rated the participation by Peruvian producers and businesses as extremely positive, primarily due to the agri-food sector being recognised across Europe as one of the country’s main economic drivers.

A range of fresh Peruvian produce was on show at Fruit Logistica this year, including avocadoes, mangoes, citrus, asparagus, bananas, pineapples, passionfruit, and berries.

Promperu’s German office announced the next wave of exports to hit Europe will consist of grenadines, dates and figs while the current shipments of asparagus, grapes and mangoes is expected to grow.