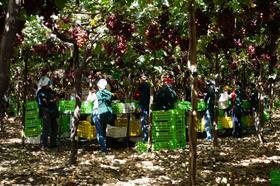 A strike by agricultural workers in Peru has left one person dead and is causing severe disruption to fruit harvesting.

On Monday, thousands of workers in Ica launched an indefinite walkout in protest against low pay and poor working conditions. They accuse companies of using third-party contractors to act as intermediaries in order to avoid statutory labour regulations.

By Thursday, the strike had spread north to La Libertad, a key production area for grapes, avocados, blueberries and other crops.

Workers have blocked the Panamericana, the main highway running from the north to the south of the country, in several areas, preventing trucks carrying produce for the domestic and export markets from passing.

According to Reuters, workers from Camposol joined the strike on Thursday, and farm labourers from agro-exporter Talsa announced they too would join the walkout on Friday.

“All activities have been paralysed, there are no harvests, there is nothing. Grapes and asparagus are going bad, we are in the middle of the season for these two crops,” grape exporter Fernando Cilloniz told Reuters.

In a statement, the Association of Agricultural Producers Guilds of Peru (AGAP) expressed its sadness over the death of the worker, Jorge Yener Muñoz.

AGAP also spoke out against the practice of agri-export companies outsourcing their labour and services to third parties.

“We strongly reject the use of services to circumvent the rights of workers in the agricultural sector. For this reason, we will expel from our union any company that engages in this abusive practice,” AGAP said.

“We will severely sanction any AGAP company that is identified by Sunafil as bypassing the labour rights of its workers, established by law.”

Francisco Sagasti, the interim President Peru, said he would work with the government to change the Agrarian Promotion Law. It is due to be debated by the Congress on Friday.