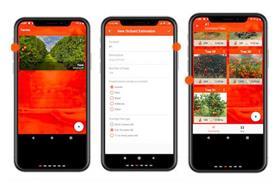 A Brazilian start-up has launched the first ever app that can estimate a citrus crop based on photos taken on a mobile phone.

Plantai uses artificial intelligence to automatically count the fruit on the tree and estimate the yield of a particular plot. It has been designed to provide growers with a simple, inexpensive and fast way to obtain the number of fruits on a tree and in a particular orchard.

“The subjectivity, reliability, storage and analysis of information collected in the field have always been challenging elements throughout the history of citrus crop estimation in the world,” the company said.

“Thus, with just one cell phone and some photos of their orchards, small, medium and large producers can obtain a second number of the fruit population of their orchards in an objective and scientific way to better target their estimates.”

Aware of the technological, infrastructural and cultural limitations faced by growers in many parts of the world, the app that does not need an internet connection in the field for automatic counting and fruit estimation.

The producer simply takes the photos and then opens up the app for counting and estimating. Very few photos are needed in a plot to automatically count the fruit and display the estimated results.

According to Plantai, even adverse environments such as high density planting, very big trees, little space between the planting rows, luminosity, time of the photo shoots and very green fruit do not impede the functioning of the app.

“Because of the ease and technology used, the grower will be able to follow the evolution of the number of fruits in his orchard before ripening, when the fruit is still green and the size of a ping-pong ball, just by taking photos of one side of the tree,” the company said.

Three consecutive harvests were used to validate the app’s statistical model, which takes into account the variety, age and size of the fruit. As the variability between orchards of the same farm, regions and countries is high, it is possible to make specific changes by further adjusting the statistical model and its parameters to better reflect the local reality of the crop being estimated.

“The scientific literature provides several methods for citrus yield maps, but, as a rule, they are extremely expensive, time consuming, laborious and only performed once at the end of each harvest,” Plantai said.

“This is not what happens with the Plantai method. You can make several yield maps at various times during a crop. Thus, you have several ‘radiographs’ of the evolution of what is most valuable in your orchard: your fruit!”

Plantai said the technology can also be applied to other crops such as: apple, mango, coffee and grapes. The app will be available from 22 October for Android and iOS in English, Spanish and Portuguese.